BioEk 2.0 has improved knowledge about valorisation of residues from forestry, agriculture and aquaculture through six sub-projects and a coordination project. Residues that today are burned or used for animal feed have moved closer to becoming more valuable products. Coordination activities have been carried out to support the sub-projects, find synergies and deal with common challenges such as raw material supply, energy integration, environmental assessment and market implementation, e.g. regulations for new foods and requirements to move from laboratory to full scale.

The innovation project consisted of six sub-projects. Within these, case studies were performed to investigate how new uses for the forestry, agriculture and aquaculture residue streams could be identified. Several partners were linked to each sub-project, both industries, research institutes, universities, technology developers and entrepreneurs. Coordination activities ensureed that synergies between the sub-projects were realised and a number of joint research activities were also performed. 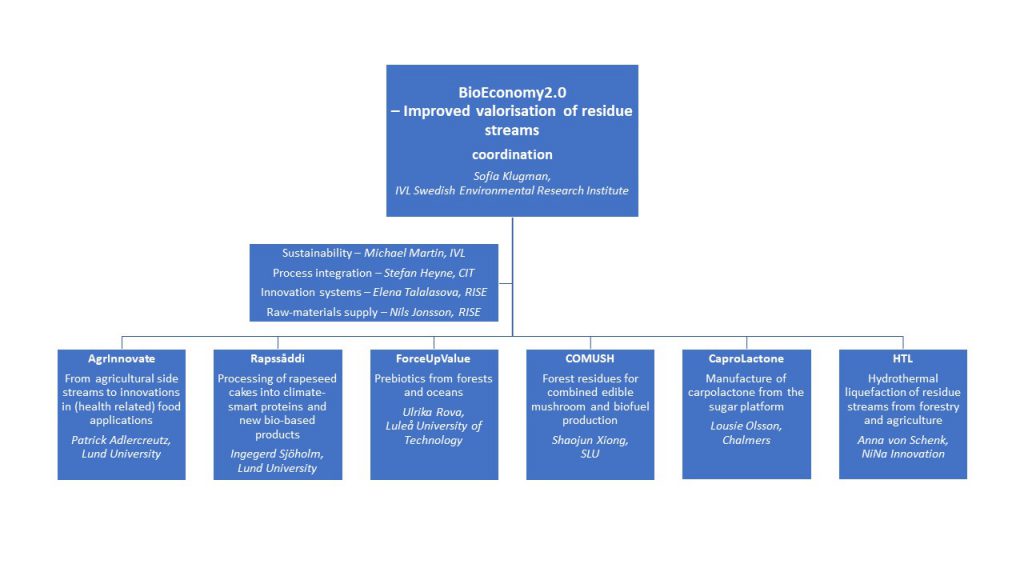 AgrInnovate – From agricultural side streams to innovations in health-related food applications – a focus on oat hulls and potato fibre
The processing of oats generates a side stream consisting of oat hulls that is currently mainly used as fuel and in the manufacture of starch. The processing of potatoes to starch generate a side stream called potato fibre, which is currently used for animal feed. These side streams consist of complex biomass and could be much better utilised. Socially, there is a need for functional products and the aim of this sub-project is to link these needs with access to oat hulls and potato fibre so that new value chains are created. Potential products include, primarily, dietary fibers.

Rapssåddi – Upcycling of rapeseed cake into climate-smart protein and raw materials for new bio-based products
The aim of this sub-project was to develop process methods for extracting and using rapeseed protein and the remaining fat, minerals and other substances from rapeseed cakes. Currently the rapeseed cake is used for animal feed. The project aimed at upgrading the protein for human consumption, mainly as meat substitute and emulsifier. For example, the project developed processes for improvement of taste and structure. Since meat production generates large amounts of green-house gases, the substitution of meat with vegetarian alternatives has great potential as climate mitigation measure. The remaining parts of the rapeseed cake was used as substrates for probiotic bacteria (prebiotics), as composites in the construction sector and as a biological pesticide.

ForceUpValue
The overarching aim of the ForceUpValue project was to produce prebiotic chitosan oligosaccharides (COS) with health-promoting effects from non-edible resources. The project’s approach was to use sustainable raw materials, namely residues from forestry and aquaculture, for the production of functional foodstuffs and thus achieve a process synergy in the raw materials flow that can strengthen technology and product development and thereby create better conditions for commercialisation.

The project developed chemical and enzymatic processes that enable the production of COS from forestry operation by-products (e.g. branches, roots and tops) and from ascidian cellulose. The project then assessed whether these can be used as synbiotics (the combination of prebiotics and probiotics) for human consumption. The potential positive effect of COS on fish farms was also assessed. That is, the potential of using COS to promote the health of the farmed fish by strengthening their immune system and promoting more rapid growth. The project also encompassed the assessment of the technical, environmental, social and economic feasibility of the project idea, as well as an assessment of potential markets.

Comush – Forest residue for combined edible mushroom and biofuel production
The overarching aim was to develop an integrated industrial chain where residue from forestry operations is used as substrate for mushroom cultivation, mainly the high value Shiitake mushroom, and where spent cultivation substrate (spent mushroom substrate, or SMS) is recycled as raw material for use in the production of biofuel (ethanol) via the sugar platform. This project was expected to pave the way for the creation of a new and financially competitive industrial value chain in both the national and international markets.

Manufacture of caprolactone from the sugar platform
Caprolactone is an important chemical that is currently used in many products, including glue and bioplastics (polycaprolactone, PCL). One of the project partners, Perstorp, is the world’s number one manufacturer of caprolactone, which is currently produced from petroleum-based raw materials. It is essential to produce chemicals using renewable materials and the aim of this project was therefore to manufacture caprolactone using the sugar platform. Today, there are catalytic steps studied in literature that could be used. However, these processes use extremely expensive materials, which would make them impossible to commercialise. The purpose of this project was therefore to develop robust and stable catalyst materials with good activity at a reasonable price.

Hydrothermal liquefaction of residue streams from forestry and agriculture
In order to increase the profitability of all processing of lignocellulose, the value of the various side streams from the process and the raw material must be maximised. Various processes that use wood as their raw material always generate side streams, for example saw dust, lignin and bark. As a rule, these are burned to generate energy for internal use, but there is a lack of clear processing concepts aimed at creating a value higher than the energy value. Moreover, there are large volumes of logging and thinning residue that have no large-scale usage areas.

One way of adding value and ensuring a broader area of use of these side streams is to produce a bio-oil using a hydrothermal liquefaction (HTL) process. The result of this process can be compared to a renewable version of fossil crude oil. The bio-oil can be used as renewable fuel oil or upgraded further to vehicle fuel. It also has the potential to be used to manufacture chemicals and materials.

The project was expected to result in a scaling-up of the HTL process into a continuous process that generates high-quality bio-oils, at a pulp mill which is project partner. The potential for upgrading these into, for example, fuel will be examined. Oils of fuel oil quality were also assessed as part of the project.